Male airport (or as it was called before, Hulhule Airport) is the largest and only international airport in the Maldives. Its exact location is Male North Atoll, near the capital, namely Hulhule Island. This airport transports about 3 million people annually. The main distinguishing features of the airport include its unique location on a long and narrow island. 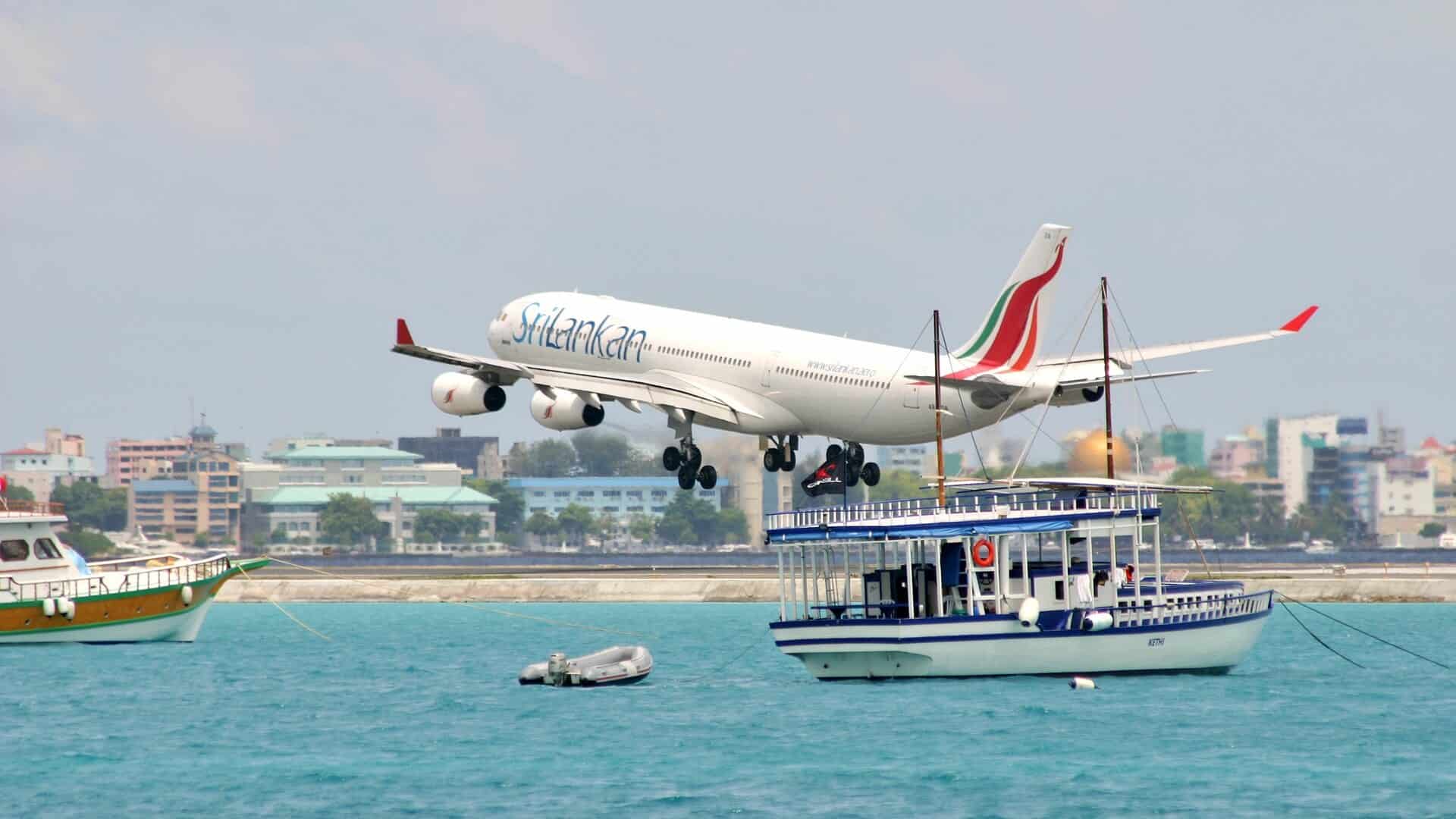 Description of the airport and history

Despite the fact that the airport in Male’ is the only chance for travelers to get to a paradisiacal holiday in the Maldives, until recently there was only one runway located right by the water. Its length is just over 3 km, width is 45 m. Last year the airport was reconstructed and opened the second runway (length 3000 m and width 60 m), which allowed to launch large passenger airplanes-airbuses transporting many tourists in one flight in the direction of the Maldives.
The airport was opened 60 years ago back in 1960 (the first plane arrived there from New Zealand), and four years later the runway had to be repaired for the first time. The steel sheet coating had to be replaced with an asphalt coating. Surprisingly, the materials were removed by ordinary local people. The fact is that the authorities announced a competition for a thousand Maldivian rufiyaa, which accelerated the repair of the airport several times. In 1966, the airport opened in a more familiar form for current tourists, and since 1981 it has been presented as an international airport. Now the reconstruction of the airport has entered a new stage of transformation. So, the Chinese building company by the end of this year promises to give new terminals, parking for planes and parking for cars.
The airport is only two meters above sea level. Its first full name (since 2011) is Ibrahim Nasir International Airport, and it was named after the President of the Republic (1968-1978) and the initiator of the airport construction. Since 2017 the airport was renamed to Velana International Airport (after the house of Nasir). The international code of Male airport is MLE and VRMM, and it is managed by the Maldives Airports Company Limited.
The airport complex consists of two terminals for domestic and international flights (and a sea terminal for hydroplanes). There are both reception desks and waiting rooms. The latter have mother and child rooms, smoking areas and even a special prayer room. There are also medical and police assistance points at Male airport, free showers, information desks and other useful infrastructure. Also, you will find here post offices and a wellness center at the airport where you can get your hair done, manicures, massages, etc. But there is no free unified wi-fi network here: behind the Internet it is necessary to approach to certain racks.

The Duty Free shops at Male’ airport are on the second floor. Alcoholic imported drinks (which, logically, can only be taken on departure) are available in the shopping area with different liquors, whisky, sparkling and not only wines. Martini, for example, will cost $10, and Baileys will cost $24. The set of cosmetics and perfumes is almost standard: these are traditional luxury brands such as Dior, Chanel, L’Oreal, Lancome, Clinique, etc. You can also find the cigar department, shops for handbags and other accessories.
Duty Free also has souvenirs: jewelry, ceramic fish, carved wood products, T-shirts with hand print for 20 dollars. For the magnetist here will be about 4-5 dollars. You can find yourself and your relatives caskets, small models of national boats and reed mats. You can’t do without sweets too: there are showcases with Toblerone, Cadbury, M & M, etc. here. There is also a shop with Maldivian spices, local grocery, tea and coffee. Maldivian connoisseurs especially praise (and advise to take in large quantities) coconut chips and canned tuna. By the way, near Duty Free shops in Male airport there are special Dhiraage counters, where you can access the Internet from stationary computers.

To find luggage collection points, you need to find a terminal on the first floor of the airport. A luggage storage room will cost you at least 5-6 dollars per day (oversized luggage will cost twice as much). By the way, you can also pack your bags before your flight for 8 dollars or more. Next to the lockers is a compartment with lost things, points for currency exchange, salons of mobile operators and ATMs. The cameras are open 24 hours a day, and you can also take luggage carts throughout the airport.

The restaurants of the airport are on both floors of the building, but there is more diversity in the departure area. There are many cafes and restaurants in the international terminal to satisfy all tastes. For example, fastfood is represented by American Dairy Queen and Burger King, and there is also a pizza restaurant The Pizza Company (from Thai) and a Thai Express. An alternative option is The Coffee Club. It is a franchise coffee house from Australia, where you can take both breakfasts and business lunches. There are two of them at the airport.
Another franchise (first in the Maldives, by the way) is Dome Male restaurant. At the airport it is also located in the departure area. Quality coffee, sandwiches, salads and cakes are always in assortment. If you want more sweets, visit Swensen (one of the two at the airport). Here the world famous ice cream is made with special recipes. By the way, all the establishments in the airport complex are open late, but the prices are as usual above the national average.

The waiting rooms at the Maldivian airport are on the second floor.

How to get from the airport in Male and not only

Travellers planning late arrivals in the direction of the Maldives should be aware that there are not too many hotels on Hulhule Island, so you should take care of your room in advance. If you are not going to stay on a small Hulhule for a long time, you should think about the transfer beforehand. It’s only 10 minutes by boat (called dhoni here) to the capital. Fast speed boats (travel time is only 3 minutes) or seaplanes can also be reached directly from the airport in Male’. They can also be used for sailing to any resort island. Boats and speedboats depart as passengers fill up, but the boat is three times cheaper. For it you will give approximately 10 rufiyaa for it, and for the express boat 35 rufiyaa.
Hydroplanes are represented by both official airlines of the Maldives and private air taxis. They are convenient to use: domestic carriers have Trans Maldivian Airways and Maldivian Air Taxi have their own offices and berths near the airport building. Only the last hydroplanes leave at 5pm. The price should be clarified on site. It is also possible to use a regular ferry crossing: the ferry for 30 passengers departs every 10-30 minutes depending on the destination, day of the week and time of day (at night, however, they do not go). One way costs about 10 rufiyaa, you can get there in 10 minutes.
A bridge was recently built in the Maldives. Sinamale Bridge connects Male not only to the suburbs, but also to the airport, so the distance of 2 km can now be overcome in a couple of minutes by ordinary public transport. It can be a bus or a taxi. The buses of Maldives Ports Limited are just approaching the ferry to Male’, so it is possible to get to Maafushi, for example, quickly. The price of the trip is 10 rufiyaa and there are buses running 24 hours a day, every 20-30 minutes. A taxi ride usually costs from 100 rufiyaa.
If you do not want to worry about getting out of the airport, you can buy a ready-made tour with a shuttle service to be picked up by the hotel staff. However, many resort hotels (even on a budget level) here are willing to offer the service of picking you up from Hulhule Island at an appointed time. Depending on the remoteness and status of the hotel to get there will offer a hydroplane or boat.